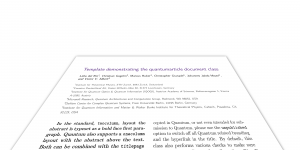 We are pleased to announce that version 5.0 of the quantumarticle LaTeX document class has been released and now ships with the following new features:

New class options & improvements
Version 5.0 of the quantumarticle document class comes with a large number of under-the-hood improvements, fixes for several typesetting glitches, and even more thorough checks and helpful error messages to make producing professional looking manuscripts even easier. We have also further increased the compatibility with other popular document classes, and introduced new class options for using quantumarticle for manuscripts not intended for submission to Quantum.

Quantum Plots
As a further service to our authors, Quantum provides Quantum Plots, a Jupyter notebook based on the popular library matplotlib. It allows to create plots that seamlessly fit with the quantumarticle document class in terms of style and font sizes. Using Quantum Plots is optional and not required to submit to Quantum, but facilitates the production of professional looking plots. A tutorial on the usage and inner workings of Quantum Plots can be found here.

Lyx layout
Some authors like to use the LyX document processor to typeset their manuscripts instead of directly writing LaTeX code. With the new version of the quantumarticle document class in place, Quantum starts to support LyX via the new quantum-lyx-template.lyx LyX layout.

Documentation
In addition to that, we have improved the explanations and stylistic recommendations in the accompanying template and quantumarticle now comes with a fully-fledged documentation of all class options and their behavior.

Thank you for your contribution to Quantum! If you want to support Quantum’s mission to make scientific publishing open and transparent and are interested in contributing, don’t hesitate to contact us at info@quantum-journal.org.