A simple demonstration of incompatibility of measurements

The model that will be presented in this paper will be as simple as possible. Although it is as realistic as I was able to make it, it is still just a model and we will have to take its rules as strictly given.

Picture this: you wake up, get up from your bed, brush your teeth, have your breakfast and then you check your phone (because who would check their phone before breakfast?). After the standard check of social media apps, you spot a new icon for an app called BlackBox. You take a deep breath and touch the icon for this mysterious app; the app launches and the screen of your phone goes black.

After a short while, two buttons, marked with the numbers 0 and 1, appear on the screen. Below the buttons there is an image of two light bulbs, as displayed on the right. At the bottom of the screen there is a short text:

“If you press one of the buttons, one of the light bulbs will blink. Pressing both buttons at once will not do anything. Your goal is to find out which light bulb will blink after pressing a certain button.”

The challenge of finding out how the app works immediately awakens your curiosity. It is tempting to start pressing the buttons to discover which does what, but let’s be careful and think. Will pressing the buttons really help us to find out which of the light bulbs will blink?

In the simplest case the app will always do the same. This means that when we press the button 0, the same light bulb will always blink, for example the light bulb on the right will blink and if we press the button 1, then for example the light bulb on the left will blink. If the app would work like this, then it would be straightforward to find out what it does by simply trying out the buttons. But in reality, we do not know whether this is the case or not, since the blinking of a certain light bulb may be influenced by the combination of buttons we have pressed before. This means that even pressing the same button several times may not yield the same outcome every time; maybe the light bulb to blink is selected at random, or it is computed using some long and complicated formula. We can formulate our problem as follows: if we press a certain button, we will never learn what would have happened if we had pressed the other button. Even if we press a random button, we would still press one button at a time.

One may argue that there are two possible solutions to the problem at hand: one approach may be to make a copy of the app, run it on two phones and on one of the phones press the button 0 and on the other press the button 1. Another approach may be to look into the source code of the app and see how it was programmed. Here is where we have to realize that this is only a model and we have to consider these two options impossible. We will revisit the two possibilities and explain why we consider them impossible in the next section.

How does this relate to Quantum theory? 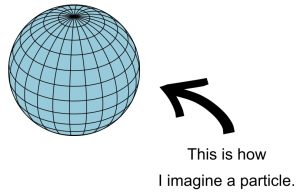 In Quantum theory, instead of working with mysterious self-installing apps, we work with particles, which are measured by measurement devices. While we may imagine particles as small balls, measurement devices are a bit more complicated. As the name suggest, they are devices and usually have a place where we input a particle and a scale that shows us the outcome of the measurement.

So what about the copies and reading source code of the app? Well, there are two fundamental results in quantum theory that forbid us to do this. The first is known as the no-cloning and no-broadcasting theorem, which shows that in quantum theory we can’t simply copy a particle (even though we can teleport it). The second result is that we can’t learn the source code (also called the state or wave function) of the particle in a single measurement.

And that is it?

Yes, that is it. Incompatibility just means that you can’t do two things at the same time. It is one of the fundamental aspects of Quantum theory and without it Quantum theory would not be quantum at all.

So basically, this article explains how in Quantum there are some things that can not be measured at the same time. This means sometimes there is a variable in which the results are randomised between different options. The article highlights the idea of an app where pressing a button (1 or 2- not both) will result in one of two lights will flash. The article suggests different ways of measuring the results but because of the randomised variable it is impossible to conclude an end result. The ultimate way to prove the randomised variable would be to go into the coding.

The most important part of the article is when they relate this example to quantum theory. In quantum instead of pressing buttons and watching lights flash they input particles into a measurement device. However instead of there being 2 outcomes (like in the app) there is an infinite amount of results. The big link between the app and quantum is- in the app you can not press the two buttons simultaneously. Likewise, in quantum you can not put one particle in two machines ​at the same time.​ Although we are able the look into the source code of the app or duplicate the app, we are unable to do this with particles. In quantum physics, there are two fundamental rules no-cloning and no-broadcasting. This means we cannot learn the source code or copy a particle.

My thoughts on the project are: I loved it. I always considered that I know a topic whenever I was capable to explain it to a 6 year old in a hypothetical conversation in my head as I never got the chance to practice on actual children, except for now. It is a valuable experience and I hope it will motivate more of us, scientists, to explain what we actually do to public. Because as it was said during a dinner I had today with two other physicists, if science was as popular as football, we would probably cure cancer in 3 weeks.

Martin Plávala is a PhD student at the Mathematical Institutes of the Slovak Academy of Sciences. Since the author of this article is not a native English speaker he only hopes that he has (or had? Maybe had had? Had head?) used the correct tenses.

Support Quantum and or print our poster.

This website uses cookies to improve your experience while you navigate through the website. Out of these, the cookies that are categorized as necessary are stored on your browser as they are essential for the working of basic functionalities of the website. We also use third-party cookies that help us analyze and understand how you use this website. These cookies will be stored in your browser only with your consent. You also have the option to opt-out of these cookies. But opting out of some of these cookies may affect your browsing experience.
Necessary Always Enabled
Necessary cookies are absolutely essential for the website to function properly. This category only includes cookies that ensures basic functionalities and security features of the website. These cookies do not store any personal information.
Non-necessary
Any cookies that may not be particularly necessary for the website to function and is used specifically to collect user personal data via analytics, ads, other embedded contents are termed as non-necessary cookies. It is mandatory to procure user consent prior to running these cookies on your website.
SAVE & ACCEPT