Crosstalk diagnosis for the next generation of quantum processors

Generally speaking, so-called `crosstalk’ denotes any type of unwanted coupling between the components of a signal-processing device — or more precisely: “any phenomenon by which a signal transmitted on one circuit or channel of a transmission system creates an undesired effect on another circuit or channel” [1]. Crosstalk is, as such, also a natural enemy of the new `quantum engineers’ whose aim is to build large-scale quantum computing devices. As diverse as the physical architectures in which a device is realised are the guises in which crosstalk may occur. For example, in a superconducting transmon architecture such as IBM’s [2] or Google’s [3] quantum devices, crosstalk may occur in the measurements as the readout resonators interact unintentionally, it may occur as the microwave control lines interfere, or as unwanted coupling between the qubit fluxes. In an ion-trap architecture, crosstalk may occur as the laser light used to induce oscillations of individual qubits spills over to neighbouring qubits due to bad `beam hygiene’ [4].

Being able to efficiently identify and eliminate the sources of crosstalk is therefore an unavoidable hurdle on the path to scaling up quantum processors. After all, in any information-processing task it is key that only the addressed components are coupled. A natural way to go about identifying sources of crosstalk is to fully characterise a device. One can then actively compensate for the crosstalk-induced errors. For example, if a single-qubit gate administered by a laser light-induced excitation affected neighbouring qubits in an ion trap, the rotation in those neighbouring qubits could be compensated with another rotation in the opposite direction. In other instances such as superconducting circuits, one may also be able to engineer the device in such a way that qubits affect each other as little as possible, for example, by placing their natural frequencies well apart from each other. But such approaches are far from being scalable in general, already because the effort of characterising a quantum device scales exponentially in its size — let alone the combinatorially increasing number of possibilities for crosstalk to occur between its components. This makes compensation or design adaptations rapidly infeasible whenever many of those possibilities are physically manifested.

In a new work, now published in Quantum, Sarovar et al. [5] take a step back and consider the problem of detecting crosstalk from a new perspective: rather than aiming to tackle crosstalk on the physical level of a quantum device, their new work focusses on its effects at a higher level of abstraction, namely, at the level of individual or fault-tolerant gates and qubits (see Fig.1). Indeed, what matters for the correct functioning of a quantum computing device is its correct functioning at the level of the computational model. Based on this observation, they define the notion of a crosstalk error as an error in a quantum circuit that is not local and context-independent. In their terminology that builds on earlier work [6] an operation is local if it acts on the intended qubits and only those. It is context-independent if the operation does not depend on outer circumstances; this might be the weather or the number of people in the room as well as — and in particular so — the circuit within which this operation is applied. The intuition which their definition comes down to is that crosstalk on the physical level causes errors on the gate level that violate either of those conditions. But it also goes beyond this intuition in that common-cause-type effects such as stray magnetic fields may cause unwanted long-range correlations in a computation.

On a more formal level, the key notions that are required when modelling crosstalk errors in a quantum information processor (QIP) is the concept of a stable QIP, i.e., one whose outputs do not depend on external contexts (such as the weather). Such a QIP should be modular in time or Markovian, implying that operations can be faithfully applied one after the other. But it should also be modular in space in the sense that local operations can be faithfully composed. Modularity in space and time thus allows talking about quantum circuits in the first place. According to the definition of [5], crosstalk errors are errors incurred in the application of local gates in a stable, Markovian QIP that do not respect modularity in space. Such errors do not obey the locality of the applied gate or depend on which other gates are applied at the same time — the `context’ of the applied gate.

Detecting the presence of such crosstalk errors can thus be viewed as a check for a QIP’s modularity in space in the same sense as a Markovianity test can be viewed as a test for its modularity in time. The authors propose a method to achieve precisely that in a `lightweight’ fashion. When aiming to detect crosstalk errors that couple, say, pairs of qubits, the protocol requires an experimenter to perform computations chosen from a set of probe circuits on all such pairs. At the same time, an independent random operation is applied on the remaining qubits, representing a particular context. More specifically still, for every pair $(i,j)$ of qubits, the protocol consists of applying a unitary gate $U_{i,j}$ acting on qubits $i,j$ together with a context circuit layer $V$ that acts on all other qubits to a reference state $| 0 \rangle$. The classical output data of the protocol is given by computational-basis measurements on the state $U_{i,j} \otimes V | 0 \rangle$ and is fed into a network discovery algorithm. Such an algorithm can detect any unwanted correlations between the context qubits and the addressed pair of qubits. Those correlations directly correspond to crosstalk errors in the quantum device.

On the one hand, a drawback of this method as opposed to similar high-level methods such as simultaneous randomized benchmarking [7] is that an observed correlation does not quantitatively correspond to the physical error rate, but only witnesses the presence of an error. On the other hand, the proposed protocol may be much less resource-intense and could thus serve as a precursor to a quantitative measurement of the crosstalk rates between qubits. Indeed, as the authors of [5] also mention, a meaningful usage of the protocol itself requires a previous check that the quantum device under investigation is Markovian and stable. We can thus view the proposed method as one of the first steps in the engineering cycle that one may run through when improving and optimizing quantum computing devices, see Fig.2. In subsequent steps, we must then strip away the abstractions made and descend into the realm of the actual physical causes of crosstalk. Once those are identified, it remains a separate challenge to find ways to scalably mitigate them. 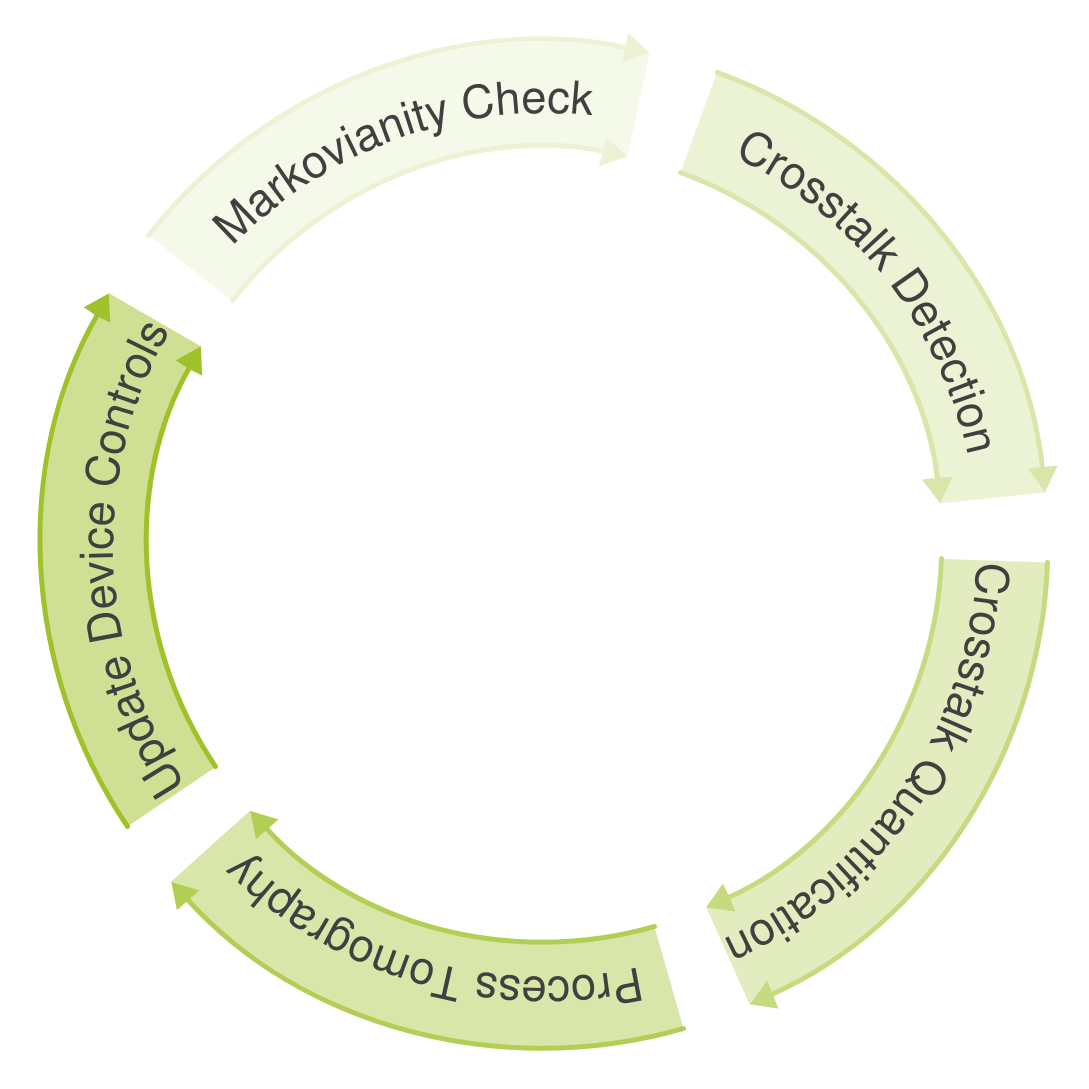 Whether or not the protocol turns out to be useful in practice as an aid to scaling up near-term, noisy quantum computing devices where crosstalk remains abundant is to be seen. Undoubtedly, though, the perspective taken and the framework introduced by Sarovar et al are timely and will prove to be fruitful in the near term: in order to build larger and larger quantum computing devices we will need a wide range of error detection and quantification protocols at different levels of abstraction and with increasing levels of accuracy. The proposed approach to formalising crosstalk errors and detecting their presence in a computation contributes one piece to this puzzle.

The above citations are from Crossref's cited-by service (last updated successfully 2023-02-04 08:58:17). The list may be incomplete as not all publishers provide suitable and complete citation data.