We establish a strong monogamy-of-entanglement property for subspace coset states, which are uniform superpositions of vectors in a linear subspace of $\mathbb{F}_2^n$ to which has been applied a quantum one-time pad. This property was conjectured recently by [Coladangelo, Liu, Liu, and Zhandry, Crypto'21] and shown to have applications to unclonable decryption and copy-protection of pseudorandom functions. We present two proofs, one which directly follows the method of the original paper and the other which uses an observation from [Vidick and Zhang, Eurocrypt'20] to reduce the analysis to a simpler monogamy game based on BB'84 states. Both proofs ultimately rely on the same proof technique, introduced in [Tomamichel, Fehr, Kaniewski and Wehner, New Journal of Physics '13]. 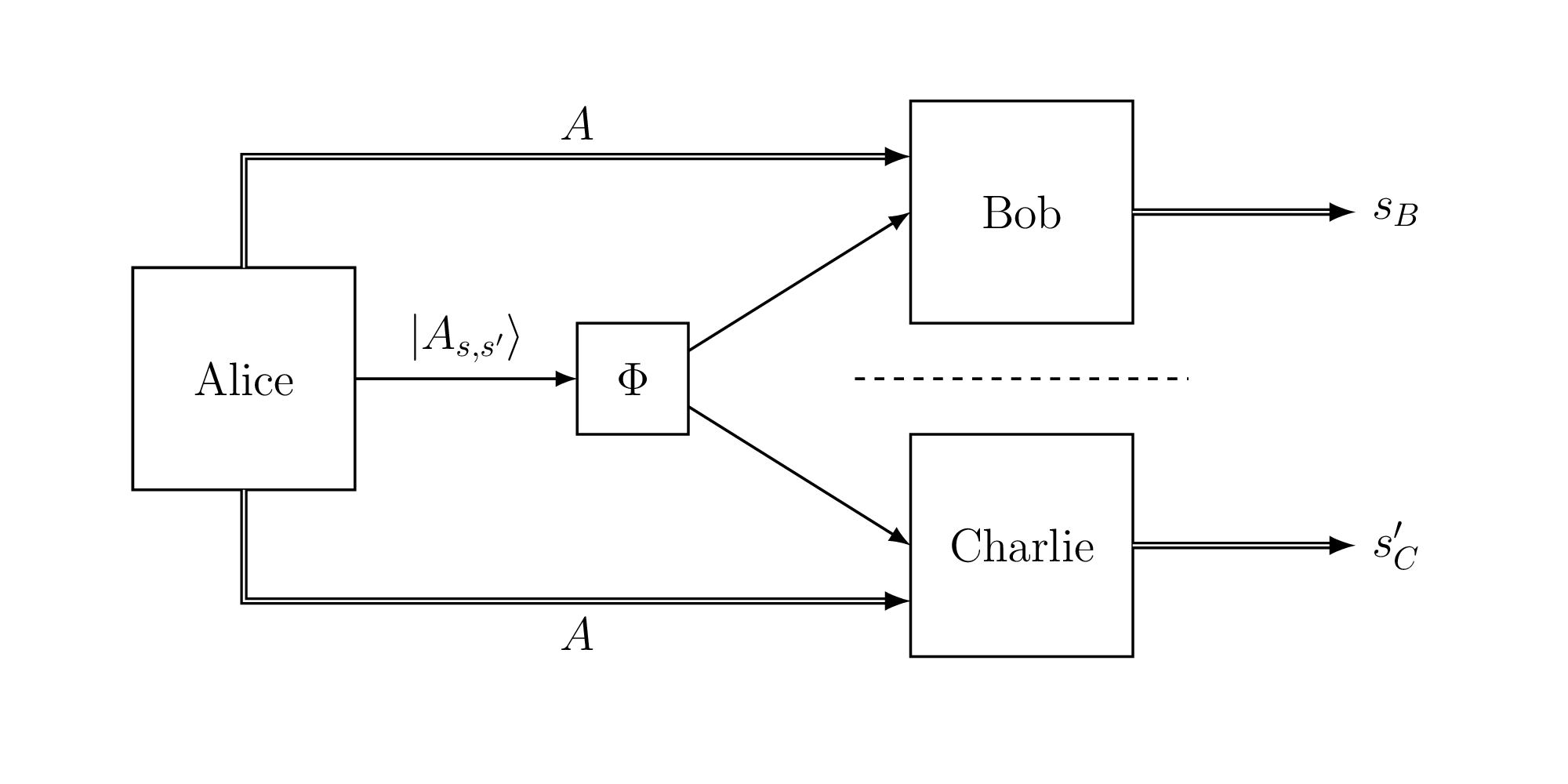 Featured image: A diagram representing the interactions in the strong monogamy game

Quantum entanglement allows for correlations between two non-communicating systems that are classically impossible, a property that may be quantified using Bell inequalities or nonlocal games. The situation gets more involved when there are more parties. For example, correlations as strong as maximal entanglement are not possible between three quantum systems. This is a particular case of monogamy-of-entanglement — limitations on the strength of quantum multipartite correlations. One way to quantify this property is via monogamy-of-entanglement (MoE) games. An MoE game is played cooperatively by two players Bob and Charlie, who each hold a quantum system but do not communicate, against a referee Alice, who has fixed actions. The players win if they can both simultaneously guess the result of Alice's measurement, chosen at random from a predetermined set of possible measurements, on a state they have prepared, each using their own local quantum system. Monogamy-of-entanglement appears in the fact that the maximal winning probability may be low while, using a maximally entangled state, either one of the players could have guessed the result with certainty.

In this work, we study the winning probability of an MoE game called the strong monogamy game. In this game, Alice measures her $n$-qubit system in a basis of subspace coset states, which is a basis that arises from a linear subspace of the finite vector space of $n$ bits. An important property of this basis is that it is naturally indexed by two indices, one corresponding to a coset of the subspace and the other to a coset of its orthogonal complement. To win the game, Bob is only required to guess the first index correctly and Charlie is only required to guess the second. Nevertheless, we show that the optimal winning probability is exponentially small in the number of qubits. The bound also holds for a version of the game where Alice sends subspace coset states rather than measuring in a basis; this version has applications to uncloneable quantum cryptography, where the no-cloning property of quantum states, closely related to MoE, is exploited to achieve classically impossible security.

This Paper is published in Quantum under the Creative Commons Attribution 4.0 International (CC BY 4.0) license. Copyright remains with the original copyright holders such as the authors or their institutions.